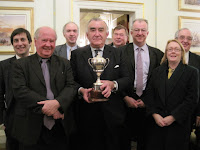 Congratulations to Ken Pattison, NEBA County Youth Officer who has won the 2009 Tom Bradley Award. The award has been given in recognition of his tireless 10 years of working in a number of schools in the Darlington and Teesside area.

The Tom Bradley Award is assigned each year to a non-school teacher for services to the teaching of bridge in England.