Congratulations to the England Team who won the Corn Cairdis by 190 VPs to 165.

Congratulations to Oxford A team (Ed Jones, James Paul, Alice Kaye, Ian Angus, Greg Moss, Joe Claley) who won the Portland Bowl this weekend. This, the national Universities Championship, is run on a knock out basis and the finals are hosted by the Portland club.

In the Semi Final, the Oxford A team overwhelmed Oxford B team by over 200 imps. In the other Semi final Edinburgh A team beat Cambridge B team by 9 imps, with the lead changing hands constantly. The final was also one sided, with the Edinburgh A team (Anna Logan, Danny Hamilton, Cyprian Laskowski, Adrianna Terriakidis) losing by 134 imps. This is the 3rd time that Oxford have reached the final - in 2007 they beat Durham, whilst in 2008 they finished 2nd to Durham.

Of the winning team, Ed Jones was a losing finalist last year and Joe Clacey a losing semi finalist in 2007 and 2008, whilst James Paul is in his first year of university, so played for the first time. The other 3 players were in the team that won in 2007.
Posted by EBU at 15:37

At a special reception held in the Lord Mayors Parlour at Manchester Town Hall the Lord Mayor of Manchester, Councillor Mavis Smitheman, said she was delighted to welcome the Manchester Bridge Association to the Town Hall and to congratulate the players on their remarkable achievements on the world stage. Other sporting heroes from last year’s Beijing Games have been honoured by the City and it was fitting that the achievements of our Mind Sports Competitors should be equally celebrated and applauded.

Kevin Comrie, Chairman of the Manchester County Bridge Association, responded by saying that as a Mancunian he was proud of his home town and proud of the successes of Mancunians especially those he knew personally. He introduced from the Manchester Bridge Association delegation a number of distinguished players -Michelle Brunner, former World and European Champion and current England player, Barbara Hackett former World Champion and current German International, John Holland current England Player, Kath Nelson former European Silver Medallist and current England Player, and Paul Hackett, former World Championship finalist ,England player, and captain of the winning European team in last years Europe vs America match. He also introduced two Manchester members of the Board of the English Bridge Union who have done much for bridge on the National stage, Alan Nelson, former Chairman of the English Bridge Union Tournament Committee and Jeff Morris owner of Manchester Bridge Club and the inspiration behind the inaugural Commonwealth Nations Bridge Championship, held in Manchester in 2002.

Kevin then went on to say that today's gathering was to celebrate the latest achievements of three Manchester players in Beijing. He introduced Michael Byrne to the Lord Mayor.

Michael Byrne is a graduate of Manchester University. Since finishing there some 6 years ago Michael has made huge contributions to local and national youth Bridge. Michael is a very good player in his own right. As a junior he represented England 14 times. Since turning 25 he has twice been selected for English Open teams. He is Squad manager of the English Under-20 team giving his time and energy over many weekends to encourage and train young bridge players. His hard work with the juniors was rewarded in Beijing in October when he captained the under 20 team to a Silver medal, losing narrowly to favourites France in a closely contested final.

Kevin then went on to introduce twins Jason and Justin Hackett. He recalled with pride that in 1996 he was lucky enough to be in the Town Hall to celebrate Gold Medals won at the World Junior Championships in Bali by the British team containing the twins. Since then Jason and Justin have moved effortlessly from Junior Champions into the Open Bridge Scene and have become the backbone of the England Open team. Currently Justin is 22nd and Jason is 26th in the World Rankings. No other English players are ranked in the top 50.

Last year Justin and Jason were selected for the English Open team in the World Mind Sports. The Open teams championship is universally regarded as the premiere championship of the World Mind Sport Games. It is played over two weeks and players can play over 100 hours of bridge within this period. It requires skill, endurance, patience, intense concentration and good temperament.

England surpassed all previous achievements in reaching the final where they faced Italy, the favourites, whose six players are all ranked in the world top seven! After a closely fought contest played over two days Italy emerged as narrow winners and England took the silver medal. Arguably this was the best ever performance by an English team. Jason and Justin are a credit to Manchester and the game of bridge.

At the end of the reception the Lord Mayor presented Chairman of the Manchester County Bridge Association, Kevin Comrie, with a hand painted Manchester Coat of Arms.

Are you a primary school teacher or an interested player in the North West? Why not come along to a practical demonstration of Minibridge at the Early Years Show on 24 April 2009, in Manchester.

Teaching Maths doesn't have to be so stressful!

"Hidden Gem: Forget poker. Celebrity card games get the country-house-hotel treatment courtesy of Clive Anderson as host and a dazzling mixed hand of celebs chasing overtricks for charity. Worth seeking out."

"Today's Choices: After the TV poker boom, bridge gets the celeb treatment, and an astonishing piece of TV it is too.Where else could you see Pattie Boyd (of Layla fame) and Sue Lawley "go to Blackwood" and end up in seven no-trumps, doubled by Kay Burley? If you play, you'll love the cut and thrust. If you are new to the game, it's a fascinating way to learn."
Posted by EBU at 14:33

Are you on Facebook? We have recently set up a group for bridge players, so why not come and join us?

Bridge: Celebrity Grand Slam, a brand new series of 30 minute programmes will be shown at 7:00 pm on the Sky Arts 2 channel from April 20 to April 26.

The programmes start with a double bill on Monday 20th and finish with a grand final on Sunday 26th April.

Eight celebrity players will playing an individual tournament for charity, with £20,000 at stake.

The programmes are compered by Clive Anderson, assisted by bridge experts Andrew McIntosh and Glyn Liggins.

To download copies of the deals, and other information, go to www.skyarts.co.uk/bridge

*Please note that Bridge: Celebrity Grand Slam is an independent production by SKY, and is not an EBU production.
Posted by EBU at 09:57 24 comments:

The EBU has learnt that bridge clubs will face increased costs due to new water rate rules from next year.

Clubs are literally watching their money go down the drain as water companies start to bring through surface area-based charging. The Water Industry Act 1991 classes only two categories of customer – domestic and non-domestic. From 2010, all non-domestic customers will be charged according to the surface area of the site rather than through the rateable value of the property; this means that many of our clubs and other voluntary organisations will end up paying more than ten times their original rate.

CCPR has launched a petition to urge the Prime Minister to instruct utilities companies to charge community clubs affordable rates for services. Please support this by signing up on link below.

..Vida Bingham, a bridge player from Sussex, and international who represented England twice. Vida owns the horse Mon Mome, which won the Grand National at the weekend. He won by 12-lengths at odds of 100/1, making Mon Mome the longest-priced winner since Foinavon in 1967.

Many congratulations to Vida and her team!
Posted by EBU at 13:35 No comments: 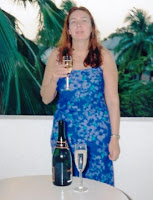 Karen Pryor was the lucky winner of the Tournament Players survey draw. She has won a free weekend at a Barcelo hotel. Thanks to Barcelo for providing the prize.

Karen enjoyed some champagne to celebrate her win!