He was a co-founder of Tewkesbury Bridge Club nearly fifty years ago, and during that time had been Treasurer, Scorer, Secretary, Chairman, Chief Tournament Director and finally President.

He had also been an active member of Cheltenham Bridge Club and virtually single-handedly formed the Gloucestershire Teams of Four League in 1977; there are now over forty teams playing in five divisions. He also started the U3A group in Tewkesbury in 1993, which now plays twice a week with an average of eleven tables.

Peter received the Dimmie Fleming Award in 2007 in recognition of his services to bridge over many years.
Posted by EBU at 16:00 No comments:

Donation can either be for St Denys Church or Countess Mountbatten Hospice.

The EBU is extremely sad to announce the death of John Carter, a long standing and hard working member of its Board who has been a key supporter of universal membership and the modernisation of the EBU. John initiated the ground breaking National Grading Scheme Project. His skills and insight will be sorely missed. Our thoughts and prayers are with his wife and family at this time.

Dr John Mervyn Carter, who died on 8 March aged 67, was a technical strategy, design and planning consultant to one of IBM’s major software products and later an administrator and board member for the English Bridge Union.

John Carter was born on 6 December 1942 in Staines, Middlesex. John won a place at University College of North Wales and gained a BSC in Physics and Mathematics in Autumn 1964, and then a PhD in Theoretical Physics in 1967.

The English Bridge Union is currently heading towards Universal Membership from 1 April 2010 and John had been heavily involved in a number of the development projects, especially as a member of the Universal Membership Project Board and leader of the National Grading Scheme Project. His great work in these projects will be seen for many years to come.
Posted by EBU at 09:37

Our fourth Tournament Focus, written especially for our Tournament players, is now available. Our last edition was the first on-line version, and proved very popular — thank you for everyone's feedback.

Tony Forrester and Artur Malinowski who came second against many great bridge players in the recent Slava Cup. 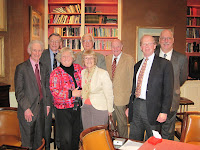