The Junior Channel took place in Lille on 17th & 18th December. It is an annual event, held just before Christmas, between teams from England, France, Belgium and the Netherlands, with the host country rotating.

Click here for the details of the programme, full results and the other participating teams.
Posted by EBU at 12:04 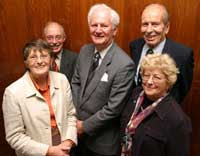 Congratulations to Cedric Cockcroft who has received the first Tom Bradley Award! Cedric has been a great supporter of youth bridge and is a well respected bridge teacher - there is even a waiting list for his teaching!
The Tom Bradley Award was created after the recent death of our former Treasurer of the EBU, who was a champion of attracting new persons into the game of Bridge and was particularly supportive of endeavours which were aimed at the younger player. Tom left a legacy in his will.
Posted by EBU at 16:55

Pictured from left to right: Catherine Jagger, Martin Jones (NPC) Michelle Brunner, Chris Duckworth (Coach), Sarah Teshome, Rhona Goldenfield, Heather Dhondy & Nicola Smith
The England Women’s Bridge Team has won the bronze medal in the prestigious European Women’s Teams Championships in Warsaw, Poland. Michelle Brunner, Rhona Goldenfield, Heather Dhondy, Nicola Smith, Catherine Jagger and Sarah Teshome with Martin Jones as NPC and Christine Duckworth as coach came third in the 48th Prokom Software SA European Bridge Teams Championships, which has been taking place over the last eight days. First place went to France with the Netherlands second. 22 countries took part. The competition was organised by the European Bridge League and hosted by the Polish Bridge Union.
This placing ensures the team has qualified for the World Championships which will take place in Shanghai from 29 Sep – 13 Oct 2007 where they will compete for the Venice Cup, the highest ranking bridge prize for Women’s Bridge Teams in the world.
The England seniors came second in group B and in the open we came 10th.
Posted by EBU at 12:14