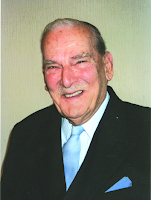 We are sad to announce the death, on 28th June 2009, of Freddie North, one of the last surviving giants of the rubber bridge era as well as a very popular bridge teacher and writer.

Frederick Lumsden North was born in Southsea in 1921. His father had been an officer in the First World War and Freddie followed in his footsteps, joining a young soldiers’ battalion at the age of 17. He was commissioned into the Queen’s Royal Regiment in 1941, promoted to Captain in 1943 and to Major in January 1945. After demobbing in November 1946, Freddie went on to the Imperial Service College (later amalgamated with Haileybury). In his youth, he had been a proficient rugby player as well as an accomplished race rider.

Freddie North was one of the first bridge professionals of post-war England. In 1950, he opened The Sussex School of Bridge, which flourished until his retirement in 2000. From the mid-70s until his retirement, Freddie also worked for P&O, organising and running bridge on cruise ships. In over fifty years of playing and teaching bridge, Freddie North also contributed regular columns to most of the English bridge magazines, and wrote over twenty bridge books, some in collaboration with the great Jeremy Flint. His elegant style of writing, lucid and gently humorous, endeared him to tens of thousands of readers and students.

Although primarily a very successful high-stakes rubber bridge player, Freddie North also excelled at duplicate bridge, becoming one of the EBU’s first Grand Masters. He won his first national title in 1948, The Sydney Woorward Cup, playing with Peter Heywood. He won the National Pairs in 1952 in partnership with Chris Hunt, The Field Cup in 1958 opposite the great Maurice Harrison-Gray, and The Daily Telegraph Cup four times (1950, 1955-56, 1963 and 1967). In tandem with John Pugh, Freddie won the Pachabo twice (1959 and 1962) representing Sussex CBA, of which he was President for nearly thirty years from 1972. They also won the Gold Cup in 1962, playing with Harrison-Gray, Rockfelt and the Sharples brothers, and Crockfords in 1967 with Louis Tarlo and Claude Rodrigue as team-mates.

Freddie represented Great Britain in the World Pairs Olympiad of 1962 and 1966, and played with Dimmie Fleming in the 1962 World Pairs. He also represented England in several Camrose matches in the late 1950s and 1960s.

Freddie North lived in Sussex, together with his wife, Margaret, and their dog, Sasha. He kept writing until the end; always the polished professional, he was preparing his next set of articles for English Bridge when pneumonia and a previously undiagnosed lung cancer brought a swift end to his long and busy life.

Our sympathies go to Margaret and Freddie’s family. He will be sorely missed by all his friends and readers.

Elena Jeronimidis
Posted by EBU at 09:30

We are sorry to announce the death of STUART SATHER on 10th June 2009, in Charing Cross Hospital after a short illness. He follows his wife GWYNETH SATHER who died in November.

Stuart and Gwyneth were active members of the bridge circuit for many years, both in the USA and London where they moved in 1979, particularly at the Wimbledon Bridge Club where they played both as a pair and with others. They were very involved in the teaching side of the game and in their retirement years were ‘hired hands’ as tutors on a number of Fred Olsen cruises, which took them all over the world. Gwyneth was a teacher on the EBU books and looked forward to her weekly sessions with beginners even when she fell ill. Stuart lent his expertise in IT to the cause and developed the membership database for the Wimbledon BC, where he also served as Secretary.

They are survived by daughter Lynn, son Trevor and seven grand-children.
Posted by EBU at 15:44

To help with the development of our competitions programme, the Tournament Committee undertook an on-line survey earlier this year. The full results are now available.

An exhibition bridge match (organised by Chris Dixon) will be taking place in the King’s Lounge of the Pump Room complex, Bath all day on Saturday 4th July, between the England Women’s team (the World Championship gold medal holders) and the England under-twenty-fives team prior to their departure for the European Championships commencing on 8 July 2009 in Romania.

EBU members and members of the public are welcome to see the teams in action by visiting the Pump Room on 4th July. There will be one session in the morning from 10.00am and one in the afternoon from 2.00pm.

The match is being held to promote mind-sports in the run up to the European Bridge Championships in 2010 and the second World Mind Sports Games in 2012. All welcome!

Further information
Posted by EBU at 10:23

We are sad to announce that Alec Salisbury passed away last week. Alec was the EBU's Schools and Youth Officer for many years.

Alec was educated at Isleworth Grammar, gained a Degree in Electrical Engineering, and Commissioned during his period of National Service.

Alec was very influencial in bridge and particularly youth bridge, later acting as Schools and Youth Officer for the English Bridge Union. He also helped support the Educational Trust for British Bridge, when it was first founded in 1991. With Sandra Landy, he produced a Manual for Teachers, which included card play via Minibridge, simple bidding and defence. They both visited many schools together to tell them about the new Bridge for Schools publication and to encourage teachers to introduce bridge into their schools. It was by this method that the game of Minibridge was first introduced into all the home counties.

The Alec Salisbury Award was later created to honour his work with youth bridge. The award is given to teachers who promote bridge in schools.

He was still teaching well into his seventies and regularly ran bridge weekends, particularly at Marlborough School and The Earnley Concourse (in Chichester). He was also a regular player on various cruise ships.

Alec will be remembered for his cheerful disposition, always willing to help whatever the circumstances. He will be sadly missed by all who knew him.

A funeral will be held on Friday the 5th June 2009 (friends are welcome to the house afterwards, but please call Mary Macrae for details: 07852512023). There will also be a Memorial Service on the 6th June 2009. The Memorial service is at Wokingham Baptist Church at 10.30am and is open to all.
Posted by EBU at 14:24

Carousel tells the story of two star-crossed lovers – Billy Bigelow, a handsome but ill-mannered carousel barker, and Julie Jordan, a naive and selfless young mill worker. This truly great classic musical is set to one of the most ravishing and celebrated scores of all time, including The Carousel Waltz, If I Loved You, June is Bustin' Out All Over and You'll Never Walk Alone.

To book, call 0870 164 8787 and quote ‘EBU’ offer or online at www.ambassadortickets.com/carousel and enter the promo code EBU.