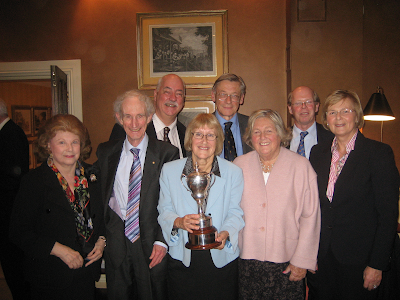 "The 37th match between the House of Commons and the House of Lords for the Jack Perry Trophy was held at the Portland Club, London last Friday. The Commons were depleted as the last general election had seen retirements and defeats for several MPs, but they came out fighting and had a useful lead at the halfway stage.
A second half revival saw the Lords run out winners and increase their lead in the series to 20-17.
The match, sponsored each year by Stephen Perry and London Export features a trophy for the best bid, played or defended hand. The Anthony Berry Trophy, judged by EBU Vice-President Tony Priday. who attended the very first match, was won by Baroness Byford for her bidding to an excellent 6D, played with skill."
Lords Team: Lord Skelmersdale, Baroness Oppenheim-Barnes, Lord Harrison, Baroness Billingham, Lord May of Oxford, Baroness Henig (Captain), Earl of Caithness, and Baroness Byford. Well done to them.
Report by Jeremy Dhondy. The match was sponsored by Stephen Perry of London Export Ltd in memory of his father Jack whose name is on the match trophy.
Posted by EBU at 11:29