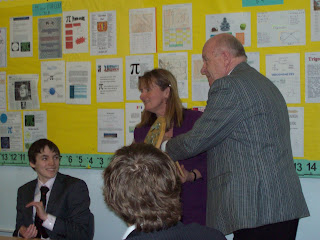 The English Bridge Union has awarded Mary Mills the Alec Salisbury Award for 2011 in recognition of the outstanding service she has given to the development of bridge at her school: Nottingham High School, over many years.

Mary has been teaching maths at Nottingham High School (an all boys independent school) for over twenty years. Mary first started playing bridge with friends as a student at Nottingham University. However, it was not until Mary started teaching at West Bridgford comprehensive in Nottingham and became involved in a team of 8, that Mary got a feel for what the game was all about.

At Nottingham High School, Mary assisted by her colleague John Allen, runs a lunchtime bridge club. The bridge club meets three times a week and numbers vary from eight to twenty boys playing. The club is open to all age groups and beginners.

Nottingham High School bridge club have had a team in the Notts team of 8 evening leagues. This has been a valuable experience for the young players over the years and has given them a good insight into competition bridge. More recently the players have practiced on line. The school also runs a two week House Bridge Competition and takes part in various simultaneous pairs events.

Over the years, the school has achieved success at the schools challenge at Loughborough, winning the Schools Cup ,the Harry Scully Trophy and this years, Schools Plate.

The award was presented by Graham Jepson in front of many of Mary’s bridge students.
Posted by EBU at 13:55