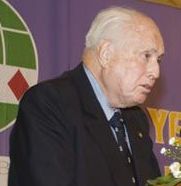 The bridge and golf worlds mourn the loss of one of the giants of both games. Jimmy Ortiz-Patiño died in hospital in Marbella, Spain on January 3. Patiño was president of the World Bridge Federation from 1976 to 1986 and is credited with returning the game to its previous lustre as an honourable pastime. Jimmy was responsible for some of the most important developments in world bridge: introducing the use of screens and bidding boxes; establishing the World Youth Team Championships; bringing China into the WBF; and successfully managing the delicate political situations between the Muslim countries and Israel and of South Africa during apartheid. He was subsequently awarded President Emeritus status by the WBF.

In golf, Patiño was the founder of Valderrama, home to many top European and world tournaments, and in 1997 engineered the first Ryder Cup to be held in continental Europe. Patiño was awarded the United States Golf Association’s Piper & Oakley Award as an advocate of turfgrass research in 1999. Angel Gallardo, the vice-chair of the European PGA Tour, called Patiño “the soul of golf in Europe”. Patiño was the foremost collector of golf and bridge memoribilia in the world.

Reproduced with kind permission from the IBPA.
Posted by EBU at 13:35